“Who would believe that so small a space could contain the image of all the universe?”

The methodology of pinhole optics was first recorded back in the 5th century B.C. when the Chinese philosopher Mo Tsu noticed that images appeared inverted when projected through a small hole or ‘pinhole’ in a darkened room. He later referred to this as a “collecting plate” or “locked treasure room”.

A century later, Aristotle noted that “sunlight traveling through small openings between the leaves of a tree, the holes of a sieve, the openings of wickerwork, and even interlaced fingers, will create circular patches of light on the ground.” (It is not known whether the great philosopher pursued the idea much beyond this observation.)

It was during Leonardo’s study of perspective in the 16th century, that the first technical description of pinhole projection appeared in his collection of notebooks, the Codex Atlanticus:

“When the images of illuminated objects pass through a small round hole into a very dark room…you will see on paper all those objects in their natural shapes and colors…Here the figures, here the colors, here all the images of every part of the universe are contracted to a point. O what a point is so marvelous!”

Translated from its original latin, camera for “room”, obscura for “dark”; the camera obscura can be any sealed, lightfast enclosure with a hole to admit ambient light, and an opposing inner surface to reflect and view the projected image. To a more or less degree, every illuminated object reflects light. The pinhole allows this reflected light to pass through the small opening (relative to the enclosure’s size) and project a perfectly linear, distortion free, albeit inverted, reflection of the subject. 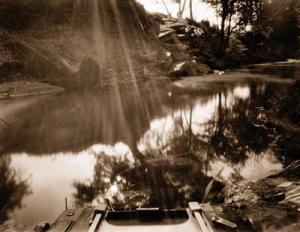 Later refinements saw the addition of lenses and mirrors within the enclosure to ‘right’ the upside-down image—photographic principles that are still in use today.

A pinhole camera can be almost any size and constructed out of virtually anything in which you can place emulsion in and poke a [pin]hole. Egg shells, peanut shells, hollowed out peanuts, soup cans, spam cans, oatmeal boxes, old Macs, old cameras; the list goes on…

Justin Quinnell, a photographer in Great Britain, has devised a pinhole camera for your mouth. He’s dubbed it the “Smileycam”. And then there’s also the garbageman from Germany who’s turning dumpsters into pinhole cameras. What does he call it? The “Trashcam”, of course. 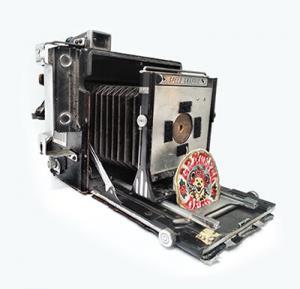 A popular small-form pinhole is this 35mm film canister method.

The largest camera obscura in the world—the Camera Obscura in Aberystwyth, Wales, boasts a fourteen inch lens and reflects a 360 degree sweep of the surrounding sea and landscape. Yes, you can literally stand inside the camera/building!

Aside from the mere entertainment value of the camera obscura, some of the Renaissance and Dutch masters were reputed to have used this device in the creation of some of their most celebrated works, allowing them to achieve near photo-realistic, distortion-free perspective in the layout and composition of their paintings.

The transformation of the camera obscura from a viewing and drawing tool, to a true recording device, happened in 1850 when Scottish scientist Sir David Brewster took the first known pinhole photograph. He is also believed to have coined the term “pin-hole” in his 1856 book, The Stereoscope. 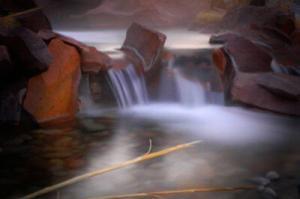 With the addition of the film component, the pinhole camera was born.

Today, pinhole art is considered a legitimate sub-genré of photography. In addition to its place in art, pinhole cameras have proven their value to the hard sciences through their use in space flight and for high energy photography in the nuclear industry’s laser plasma research.

Perhaps the defining characteristic of the pinhole is the absence of a “proper” lens. With only the atmosphere separating emulsion and subject, the camera’s depth of field is nearly infinite, wide angle images appear almost distortion-free.

Sounds simple enough, but the Pinhole is hardly without its quirks. Since the device operates without a viewfinder, framing ones subject can be a hit or miss proposition. Once, however, the photographer gains familiarity with his/her chosen camera, they will gain a feel for position and placement. 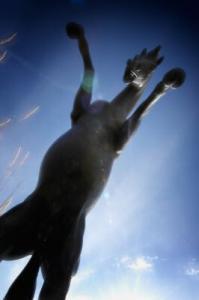 This placement, along with timing and exposure, relies heavily on the artist’s intuition and expertise. “Shutter” operation is a manual proposition, to say the least. Methods run the gamut, from electricians tape to, in the case of photographer Jody Aker’s modified Speed Graphic—a velcroed-on Grateful Dead patch.

Despite what some would call “limitations”, many accomplished fine art photographers revere this simplistic approach to their craft for the stripping away of technology that, may or may not, help in the creation of photographic art.

Twenty years ago, noted Colorado lensman, David Sharpe, felt “boxed in” by the sometimes tedious nature of traditional photography. He liked the way the Pinhole allowed for a more poetic interpretation of his subject matter—without the often cloying technology that had come to define modern photography. Hooked for good, Sharpe embraced the pinhole aesthetic and never looked back.

Although he agrees that the pinhole leaves a lot to chance, Sharpe actually likes not having to look through the viewfinder, relying instead on the intuitive feel that the pinhole requires of its adherents. “I love the alternative approach; the softer, not as ‘dead-on’ nature of this medium.”, David observes. 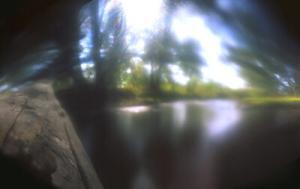 Sharpe’s platform of choice is the “small-form” film canister pinhole. Typically, he will bring 16 to 19 of these set-ups on photo excursions. Experimenting with different focal lengths and short exposure times, David has achieved amazing results with what he calls his “pinhole instamatics”.

Often, an artist will, at some point in their career, decide if they are photographing for the image or for the process. Many artists will agree that the process IS the art, or at least as important as the final image itself. The beauty of the pinhole camera, is that it lends itself so well to this creative process by almost forcing one to engage the subconscious creative power that technology often subverts.

The pinhole camera doesn’t overwhelm or try to ‘lead’ the artist with endless technology-driven choices. It is a collaborator that, by way of an almost misleading simplicity, works with the artist to reveal the art within. 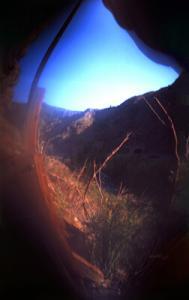 April 28th is Worldwide Pinhole Photography Day. To celebrate, we have made this week’s Facebook Photo Theme, drumroll please… “Pinhole” Drop by our Facebook Page and show us your stuff.

Fifty years ago, no one could have predicted that a novelty item, given away as consolation prizes at raffles and sold in the back of comic books, would blossom into a bona fide art movement. Although there are many makes and models, the rediscovery of Toy Camera photography can probably be traced to the now legendary Diana camera. 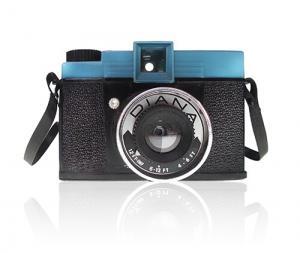 Introduced in the early sixties; the 120 format Diana was sold as a cut-rate, novelty item manufactured in Hong Kong and wholesaled across the US by the Power Sales Company of Willow Grove, Pennsylvania.

The Diana set the template for the low tech photography aesthetic. Characterized by its rudimentary spring-loaded shutter, manual film advance and most notably, a plastic lens, the camera performed about as well as its cheap, light-leaking plastic body suggested.

Not really a toy and certainly not a serious camera in any sense of the word, the Toy Camera was destined to become a temporary glitch in the already cluttered toy and novelty landscape. It was to photography what the Easy Bake Oven was to the world of household kitchen appliances—a TOY.

Something, however, derailed the Toy’s path to cultural obscurity—it took really cool pictures!

Though it’s always hard to pinpoint exactly how or when these things get started, I like to imagine that around the late seventies or early eighties, some anonymous soul remembered the visual thrills that this unassuming little box produced in their childhood photo excursions. In search of something without really knowing what, and perhaps weary of modern photography’s soul-deadening technology, he or she dusted off the old Diana and the Toy Camera Revival was born.

Professionals, amateurs and art lovers everywhere are fascinated by the equalizing nature of this little plastic box. No complicated accessories, no thousand dollar lenses, and no megapixels, help to strip bare the art and science of serious photography. 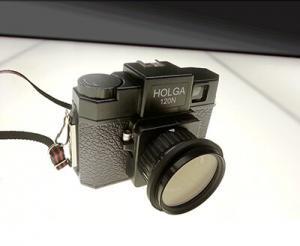 An owner-modified Holga. More serious looking than the Diana – but not really.
— Camera courtesy of John Harris — Photo by Greg Osborne

It comes down to the basics: your skill with the plastic box and your God-given EYE.

Yet, with that said, what many find so endearing about Toy photography is the way it lends itself so readily to the Happy Accident. It’s a little like handling nitroglycerine—or herding cats—you never quite know what’s going to happen. Many seasoned photographers wax poetic over the liberation from technology, the sheer sense of the unknown that this primitive tool allows them.

Aside from strict photo journalism, few other branches of photography are as distinctly purist in approach to their art. Though Toy Camera effects can easily be mimicked with apps like Instagram, Pixlromatic and Hipstamatic; and professional-grade programs like Photoshop and Painter, loyal adherents eschew these tricks in favor of recording, warts and all, that true moment in time.

The textured, sometimes haunting imagery that can be achieved with the Toy Camera so completely captures the ephemeral nature of life, that some professionals feel this pictorial offshoot captures the essence of what serious photography is and should be about. 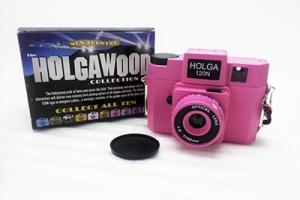 With the addition of manufacturers and distributers like Holga, LOMO and Lomographische AG to feed the obsession, Toy Camera photography has evolved into a viable, worldwide, creative form.

Highly regarded exhibits at the Soho Photo Gallery in Tribeca, New York, and serious books like The Diana Show: Pictures Through a Plastic Lens by David Featherstone and the now classic, IOWA by Nancy Rexroth, also helped to legitimize and further the movement.

So what does Toy Photography have to do with Colorado? You might have noticed Reed Art & Imaging’s building at the corner of 9th and Federal, plastered with a melange of images—a few of which are great examples of what the Toy Camera can do. 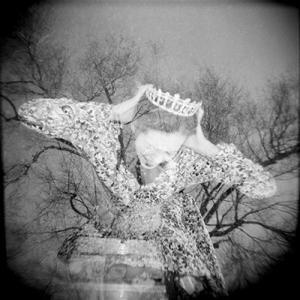 This was part of Reed’s sponsorship of this year’s Month of Photography (MoP). We also partnered with Mark Sink who founded The BIG PICTURE Colorado project here in Denver and who is a driving force in the local photography and creative scene.

Mark’s work and past association with people like Andy Warhol are well documented. What people may not know is that he has been a Toy Camera photographer and advocate since he was a boy. It was through his love for this process that he recently offered his Toy Camera Workshop to dozens of local enthusiasts. Reed Art & Imaging was fortunate enough to help out with film processing services for this worthy event.

Did I say film? Yes—Film is not dead!

We’ve been processing film for over 37 years and will continue to do so for as long as you need us. Of course, we do way more than simply process film. We encourage anyone who has not been into Reed Art & Imaging to come by and see for themselves the vast array of products and services that we can offer to creatives and non-creatives of all stripes. 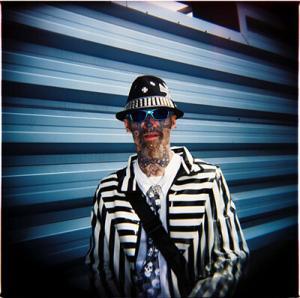 We don’t just work here; we are working photographers, artists and enthusiasts. We live and breathe great images and great photography. Your creative vision is our priority. We are you.

Stop by and say hello. We’re here to answer questions, talk art and photography or anything else that you’re curious about—and that includes the light-leaking charm of the great Toy Camera!